Welcome to the first informational post on the GridDyn Blog! This blog site will serve a variety of purposes:

— As a repository for examples of how to use GridDyn;
— Highlighting new features and functionalities;
— Providing troubleshooting tips and support; and
— Acting as a supplement to the available documentation.

To kick things off, let’s begin with instructions for compiling on a Windows OS computer using Visual Studio as the compiler. (I’ll show you how to do this using MSYS2 in a subsequent post.)  As a note this process is continually evolving and will likely change (hopefully for the better) as time goes on.

Before we begin, I am going to make some basic assumptions:

For starters, it is necessary to have the Git version control system (and a suitable Git client) installed on your PC. I personally use TortoiseGit.

Next you’ll need to install Visual Studio on your PC if you do not have it already. The Community edition works fine since this is an open-source project, but if you already have other editions, they should work as well. Visual Studio 2015 or newer is required due to GridDyn’s use of C++11/14 features.

Next you will need CMake, an open-source, cross-platform family of tools designed to build, test, and package software, and to create project files. The installation is self-explanatory.

GridDyn makes use of the Boost C++ libraries for many of the components and libraries. These are free C++ libraries available from SourceForge. You can use version 1.61. Not all features of GridDyn will work with versions older than 1.61; progressively fewer features will function as we go forward and more parts of GridDyn are updated and enhanced.

I typically extract the compressed archive to a folder on the root directory, such as C:\boost_1_62_0. Boost has its own build system that can use the Visual Studio compiler. For some additional instructions on building Boost, check out this post on Studio Freya: How to build Boost 1.62 with Visual Studio 2015. Only the 64-bit editions are needed for this application. I would advise using the default installation location instead of the one used on the website. The following screenshots show the build instructions. 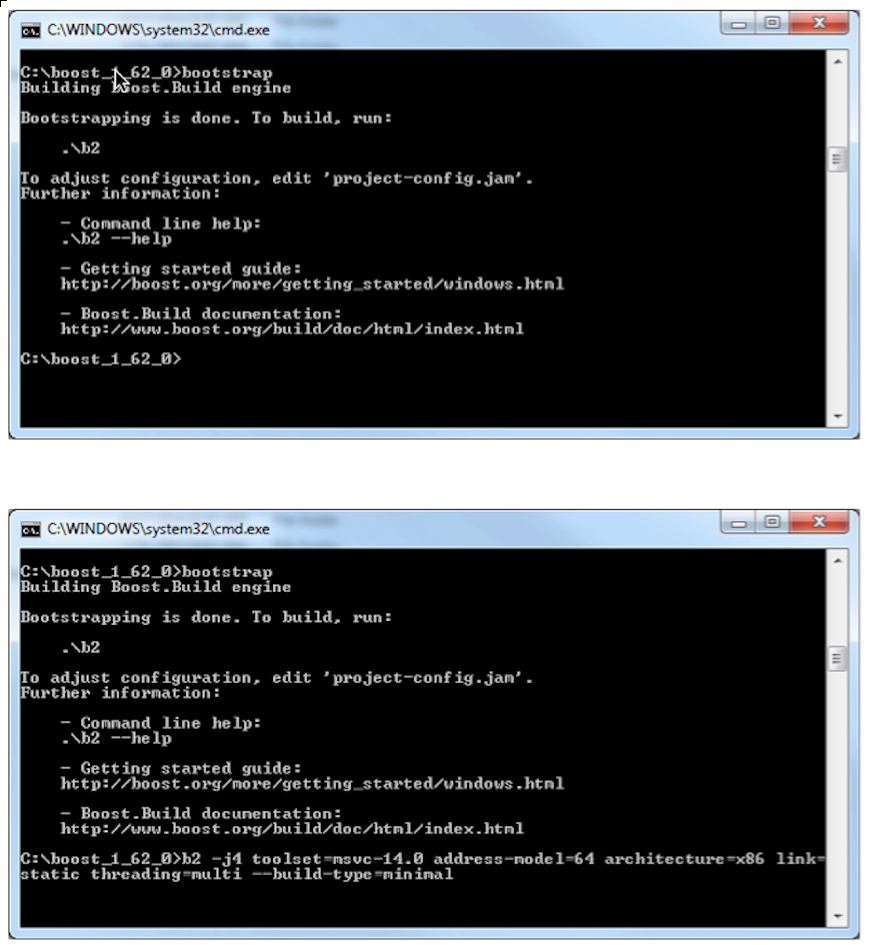 Before building SUNDIALS and GridDyn, you must download and build SuiteSparse, another dependency of which you’ll principally use KLU, the sparse-matrix solver.  The GitHub repository contains the instructions for building SuiteSparse on Windows. It can be downloaded on whatever Git interface you’re running.  If you are using TortoiseGit, see the following screenshot. 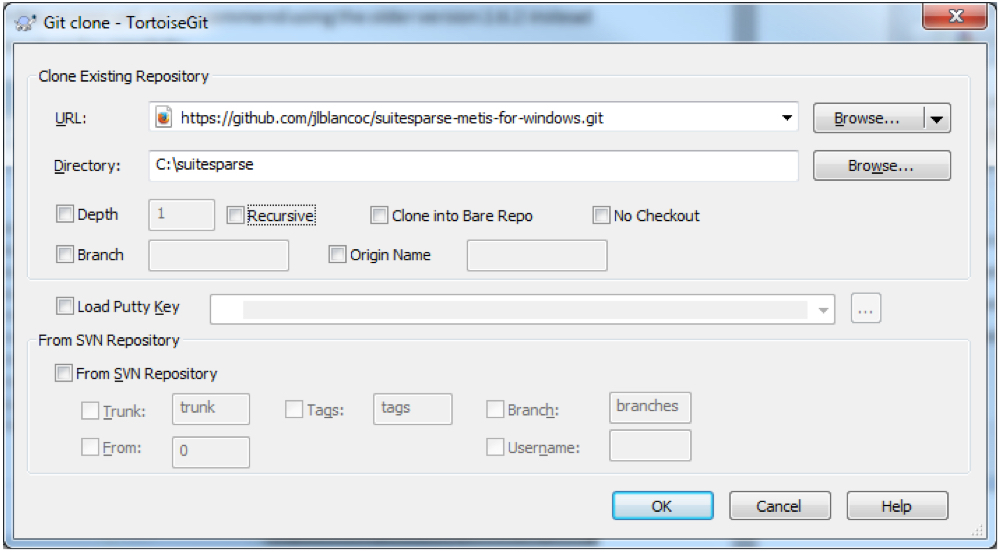 Select the “Visual Studio 14 2015 Win64” option on the drop-down menu. You can choose the 32-bit version, but then Boost and all other dependencies would need to be built similarly.  Click “Finish.”  I typically deselect the “Shared Library” option since GridDyn doesn’t use that currently. Then click “Generate.” The configuration page should look similar to the following screen shot. 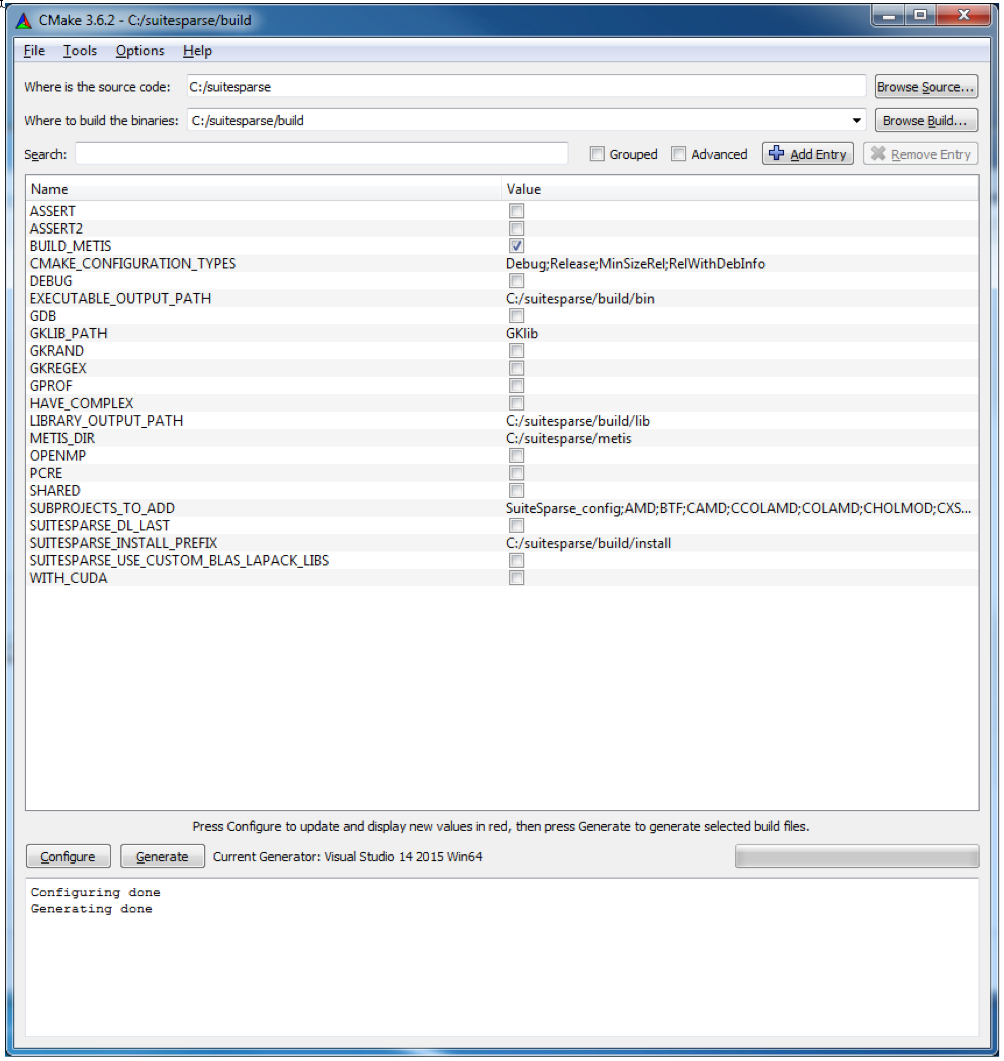 At this point in the process, you can open the project in Visual Studio and build the release version and debug version (if desired). Once that’s built you will need to build the INSTALL project as well, which can be done by right-clicking and selecting the “Build” option.

After SuiteSparse the next dependency is SUNDIALS, which can be downloaded from the LLNL SUNDIALS web page. SUNDIALS is a numerical solver library that is used in the default solvers in GridDyn.  The current version is 2.7.0.  However, GridDyn has not yet been tested with this version, so I recommend using the older version (2.6.2) for the time being. Build the directory structure shown in the following screen shot. 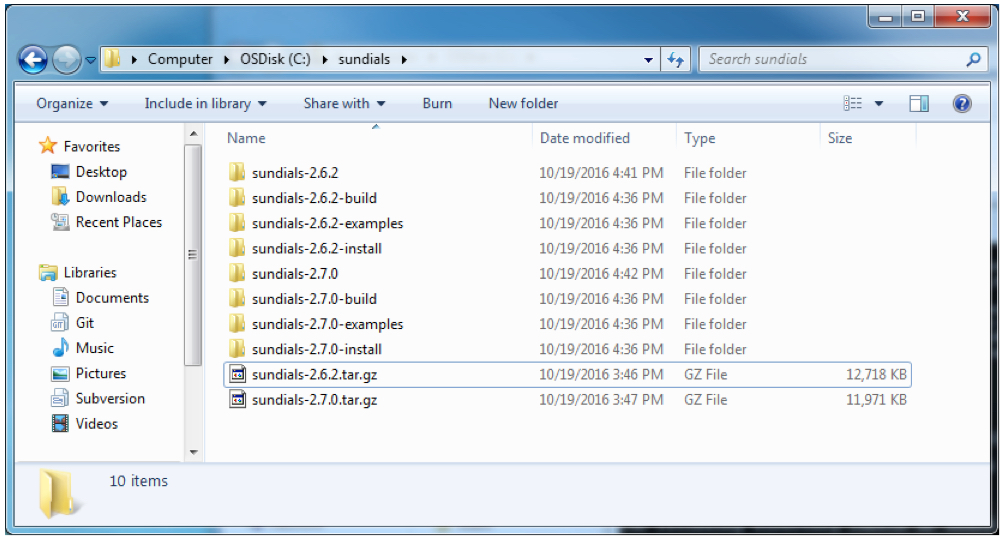 Next you’ll need to build SUNDIALS. This is a little more complicated process than the one used to build SuiteSparse. The Sundials build system has to know where to find SuiteSparse, but the build functionalities built into  Sundials to do this don’t always work well on Windows, they will work if you specify the folders directly.  I usually replace the findKLU.cmake file in the ${SUNDIALS_ROOT}/config directory with the equivalent one from GridDyn in the GridDyn/config directory. This requires that you have access to the GridDyn source code, which is available from GitHub at https://github.com/LLNL/GridDyn.git. Look in the config directory, grab the findKLU.cmake file, and replace the similarly named file in the SUNDIALS source directory.

Next open CMake-gui again and point it to the SUNDIALS folder. I made several modifications to the default settings’ values, including the following:

— CMAKE_INSTALL_PREFIX should point to created install directory.
— Enable CXX.
— Select whether to enable the examples. If YES, point the install to the created examples directory.
— Select OPENMP_ENABLE.
— ENABLE_KLU.

After a first round of configuring, an option to specify KLU_DIR should be displayed. If everything works properly, you should be able to point this to the SuiteSparse install directory and run configure again.  The other locations should then be populated correctly and you should see a line like this:

If that line shows a failure, it may be necessary to manually fill in the KLU_INCLUDE_DIR and KLU_LIBRARY_DIR with the appropriate locations from the SuiteSparse installation.  The next figure shows a screenshot of the CMake Gui window when building the project files for SUNDIALS. 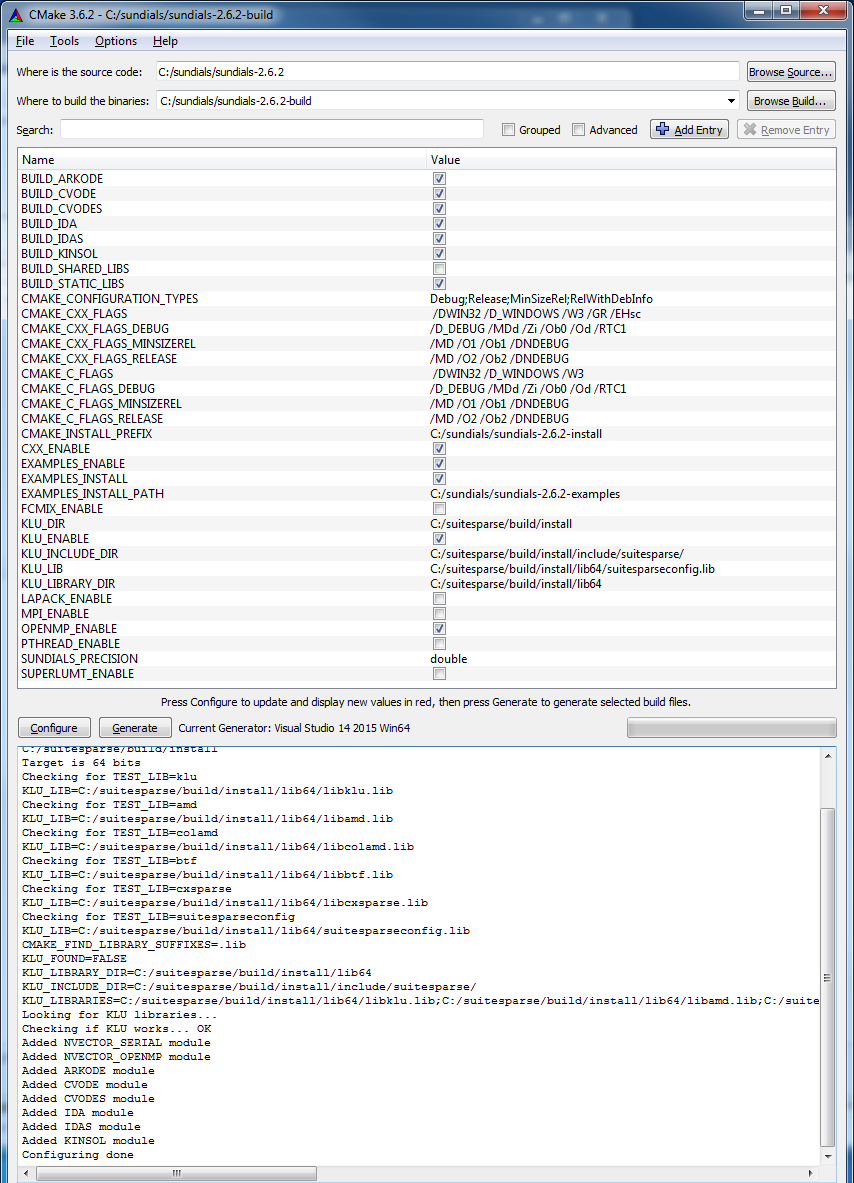 At this point, SUNDIALS should configure and generate; once it has generated you can open the solution file and build it. I recommend that you switch to the release build instead of debug.  If the examples are built with CXX (a C++ source-code file type), it is likely an error will appear. In the file in question, it is necessary to change the string header #include<string.h> to #include<string>, then things should compile properly. This is a peculiarity of how Visual Studio manages string headers. I am pretty sure it was fixed in the newer version.

GridDyn also uses the CMake toolset. There are a number of options available when it is first configured. Refer to the GridDyn Users Guide for further explanation.

It will be necessary to replace the KLU_INSTALL_DIR location,  the SUNDIALS_INSTALL_DIR, and the BOOST_ROOT, which may only be available in the advanced options (an issue I am working on). If everything is specified correctly, it should configure (see the following screen shots). 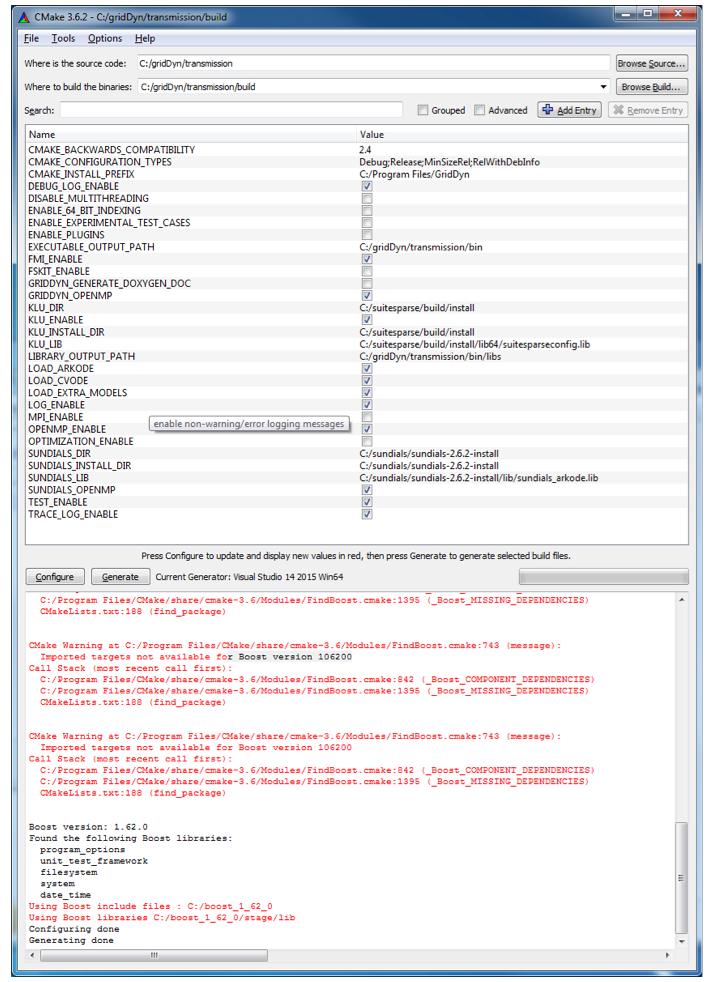 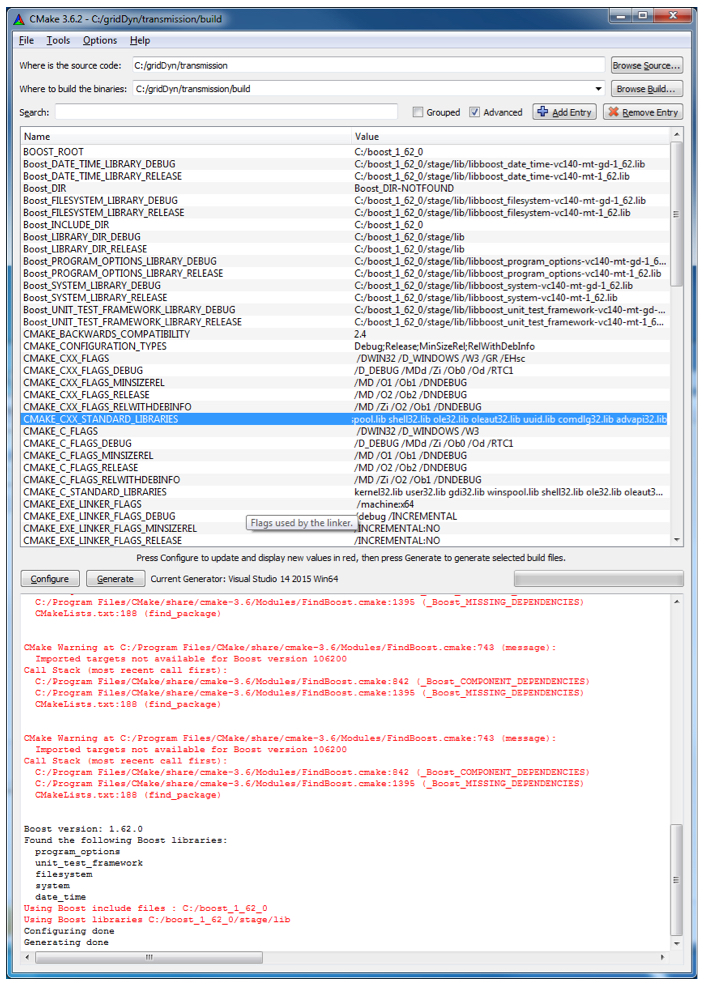 If you are using Boost 1.62, you may see some warnings that the version is not recognized by CMake.  This will probably be fixed in newer versions of CMake; it doesn’t seem to impact operation. 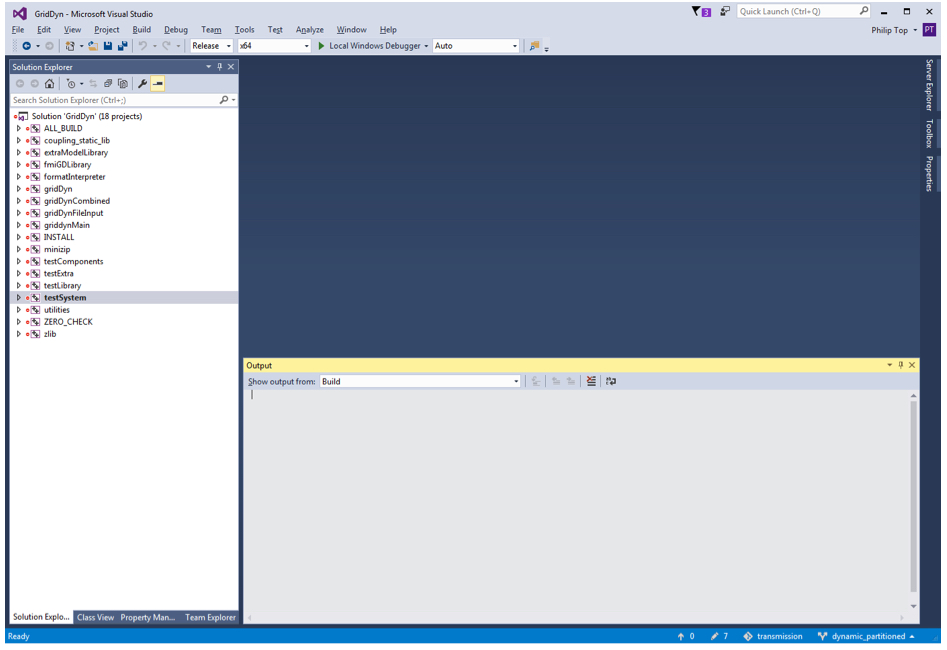 If you set the testSystem as the startup process and press Ctrl-F5, it will run the test program in a command window and display something similar to the following.

This build process is somewhat convoluted, but I am working on improving it; it will improve over time as more development takes place.   One thing I am exploring is the use of CMake external projects to script the entire build process for at least some of the build dependencies.

Fortunately, this is a process that is required only once per build method: after it is built the first time, the dependencies usually do not need to be built again, provided they do not change.

The next post will be about the build process using MSYS2 on Windows. In the coming weeks and months I will cover using GridDyn to perform a variety of simulations on the power grid.